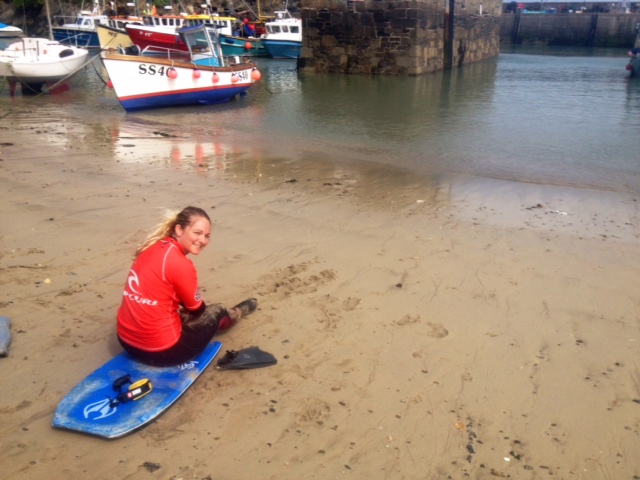 Yesterday Louisa Higby visited us from Bude who was focused to improve her riding, specifically focusing on duck diving, trim speed and selecting the best waves.

Rob Barber coached the lesson and commented “We chose to begin our session at the bodyboard school by analysing imagery of what we were trying to achieve, having a mental picture of the goal is hugely important”. Barber continued “We chose to hold the session at mid tide Towan beach with clean two foot waves, but we began the session in Newquay harbour to use the flat water to iron out paddling technique, body positioning and then duck diving”.

Louisa picked up the techniques very quickly and the lesson continued in the fun waves of Towan beach which supplied two foot peaks, some fast drops and the chance to really hone the paddling technique to catch waves at the last second and drop in to them with a mid face bottom turn. After an hour or so Louisa had advanced her skills suitably to challenge the angled waves of Towan wedge and managed to tweak her take off technique to drop in at an angle and gain huge amounts of speed as she headed down the line.

As you can see from the image, Louisa managed to catch the waves quickly and easily using the locked arm technique that she learned. By catching the wave early she allowed herself to choose a better line across the wave face, which extended her time on the wave as well as, more importantly giving a more FUN ride. Louisa has expressed an interest in joining one of our coaching weekends to benefit from the video analysis sessions and take her riding up another step. We look forward to seeing you again soon!