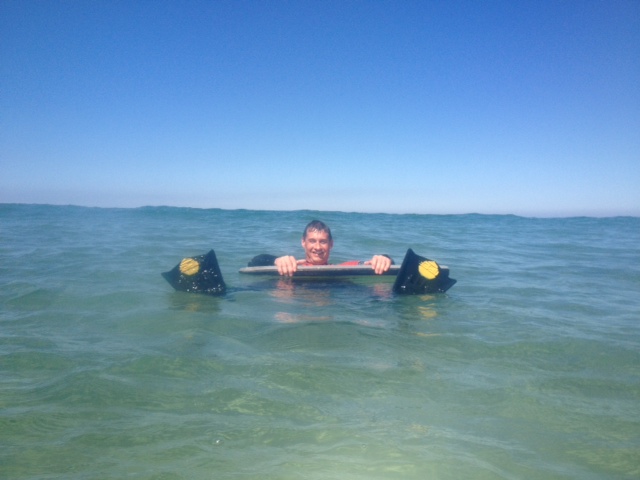 A very successful weekend, be sure to check in and book up your place on the next weekend today!

We had a great turn out for the first classic bodyboard weekend of the year.

We where really lucky to score great weather for the whole weekend. Before we started we all sat and talked about different ability levels finding out what everybody wanted to get out of the weekend, whether it was wearing fins for the first time, catching more waves or busting there first roll.

The Saturday morning session consisted of video analysis in punchy 3ft Fistral. We had a range of abilities. We took the short walk down the beach in the sunshine and split the group on the beach, Sam went through rolls and spin technique for those more advance in the group and Rob took the others through using fins and catching their first white water waves.

The level of stoke was high after the first session spins and rolls had been landed and everyone had there fair share of waves, it was time for a big lunch and some video analysis.

The afternoon was a little smaller but there was still plenty of waves for the crew as the tide began to push in. Again we got a wide range of video footage from all the riders for reviewing after the surf. Noticeable improvements where starting to be made throughout the group and enthusiasm was high leading into our beach BBQ at the breaks down on Tolcarne. We had a good chat about the day over some food and a few beers whilst watching the sun set over the sea.

The waves where smaller on Sunday and there was a few new faces at the school in the morning as well as those from yesterday that where back for more! We made the call to go on a surf safari to find the best waves on the day. We ended up scoring some small but fun left hand wedges at Perranporth in the morning, the crew worked on paddling to the peak and gaining down the line speed.

In the afternoon we took a trip up to Watergate the wind had come around but there was still some fun waves to have and the sun was still beating down on the more than keen bodyboarders. We finished the weekend with analyising the remaining video footage everyone had something to take away with them!

Overall it was a really fun weekend and some great progress was made throughout the group.

If your interested in giving bodyboarding a go or want to brush up on your bodyboard skills give us a call and get yourself booked on a bodyboard weekend, or pop in store and say hello.