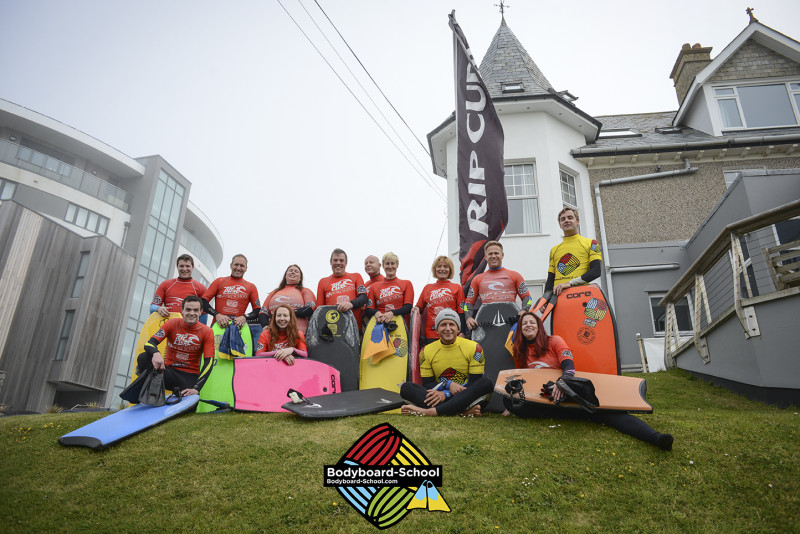 Bodyboard Lessons – Where There’s A Will There’s A “Wave”

Bodyboard Coaching Weekend, May 2015, sponsored by Core, NMD, Stealth and The Bodyboard-Depot.

Our first bodyboard coaching weekend of the year once again demonstrated you shouldn’t believe everything you read on Magic Seaweed! By all means it wasn’t pumping out there during the two days but if you are willing to go on a surfari, Cornwall will usually be serving up the goods somewhere along the coast. There are so many nooks and crannies, you just need to know where to look.

It was great to welcome back some familiar faces as well as meeting some newbies on Saturday morning. After introductions and a rundown of weekend objectives we waxed up our boards and battled the sea fog for a perfect warm up session down at Fistral.

After a break for lunch and review of the video analysis the crew headed out on the road to Perranporth in search of a bigger wave as the tide dropped out. We were greeted with some 2- 3ft super fun waves that picked up as the session went on. All the crew capitalized on the conditions and showed fantastic stamina in this long session.

Liz Blackmen from London caught so many waves and this neat trim down the line was one of her finest of the weekend.

Two new recruits, brothers Josh and Ben Phipps from Bristol demonstrated fantastic progress dropping in on some of the biggest waves of the day.

Bradley ‘barrel hunter’ Mansfield who is a weekend regular caught some cracking rides during this session and demonstrated how far his riding has come along over recent years.

Coach Rob Barber got stuck in as well…

By the end of the session clear lines were rolling through, the sun came out and the local festival Tunes In The Dunes gave us a perfect summery serenade to push us on!

Everyone was tired and stoked after a cracking session as they headed on out.

The crew had a hearty meal at The Stable restaurant overlooking Fistral Beach before heading down to watch The UK Pro Surf Tour Night Surf event.

Everyone was back for more bright and early on Sunday morning. Whilst we waited for the tide to drop we checked out the new Bodyboard-Depot shop on Beacon Road (opposite the Red Lion pub) and Rob Barber delivered a presentation on the new and exciting ISS stringer system that is available on NMD and VS boards. This revolution in the sport see’s boards available with stringers of different stiffness. So you can use the stringer that offers your preferred flex. Whether you like stiff boards, medium flex or a flexy board you can simply swap the stringer over and you are covered. Rob explained what an advantage this was if you were to travel to tropical climates, you can use the same board that you use in the UK by simply swapping the stringer. Also, when you purchase a new board and it initially feels very stiff, you can use the flexy stringer to give the board increased flex characteristics. When your board becomes older and naturally becomes more flexible you can just change the stringer to increase the stiffness and give it a new lease of life. The crew took the board down to Fistral and had some fun in the shore break trying the variations in flex.

It was a bodyboarding fiesta down at Fistral Beach for our first session of the day. With conditions suited far better for the boog we were joined by a mass congregation of other keen bodyboarders all making the most of some tricky but manageable waves.

Before hitting the road to Perranporth again for our final session of the weekend, there was time for another indepth look at images from the Saturday afternoon session. It was a perfect opportunity for coaches Rob Barber and Joe Woodhouse to identify some key points on technique for the crew to work on during the final session. Our photographic team captured some fantastic roll and spin attempts as well as party waves.

Rob Barber pin points the roll technique before heading out.

Wave of the day had to go to Sabine Nacke from Newquay who amazingly had some how avoided taking the bodyboarding plunge until now but seemed a total natural as she ploughed down the line with speed and finesse!

Once again we saw just how beneficial a full weekend of bodyboard coaching can be with vast improvements all round. Peter Wetherill from Brighton claimed the prize for most improved and won himself a lovely pair of Stealth Fins. Pete had only belly boarded (on a wooden board that he had made himself!) once before and was catching plenty of waves all weekend.

The grand prize and brand new Core bodyboard went to Liz Blackmen from London who proved how far you can come in such a short space of time in the sport. Having been on a couple of coaching weekends before, Liz decided to join us on one of our international coaching holidays to Costa Rica which has clearly played a huge role in her fantastic improvement. Her technique and speed has shot her wave count up and appears to be heading very soon towards pulling off some tricks next time she gets in!

Thank you to everyone who joined us, what a great way to start the season off! If interested in joining us for a bodybard coaching weekend in the future check out this link to see all upcoming events. If perfect waves and perfect weather sound appealing you can see our bodyboard holiday page here.

REMEMBER, DON’T LET YOUR LIFE BE RULED BY SURF FORECASTING SITES. THERE IS NO BEATING LOCAL KNOWLEDGE, AWARENESS OF TIDES, WINDS AND SECRET SPOTS : )