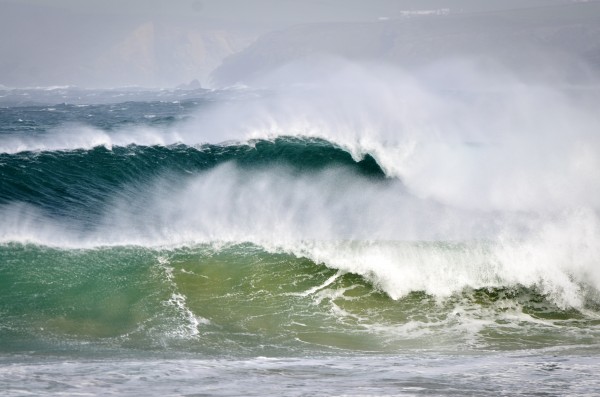 A crew of mixed ability bodyboarders benefited from some fantastic five-foot plus conditions to really take their riding to the next level on October 26/27.

The weather forecast was showing a low pressure system spinning through the Atlantic ocean that could only mean one thing, huge waves and strong winds towards the back end of the weekend. Taking this in to consideration, the coaching staff consisting of Rob Barber, Joe Woodhouse and Shaun Marot decided to time the coaching sessions to get the best out of the conditions throughout Saturday and Sunday.  The results were what many of the attendees classed as their best waves ever!

Our initial briefing and Q and A session highlighted a number of issues that people wanted to look at. Cathy Kingcome had been bodyboarding all her life but had never become familiar with swim fins or surfing outback. Simon Town had attended one of last years coaching weekends and had found the overall advice so useful that he was back for more, this time wanting to improve his approach to the lip and ability to launch airs. Jane Oxley from Redruth was fairly new to bodyboarding and had a fear of going out back and catching bigger waves, she was also much stronger riding in the righthand direction rather than the left. Kay Reynolds had attended a bodyboarding weekend earlier in the year and loved it so much that she had come back for more, wanting to work on her timing and jump launch technique and increase her skills in preparation to attend our Morocco coaching trip in March. A myriad of issues were discussed, targets were set and off we went to ride three foot high tide Fistral for our first two hours of video analysis.

On our return to the classroom the video analysis highlighted some important pointers about wave selection, elbow positioning, not taking a high enough line across the waves and the importance of paddling with an increased economy of movement. Some riders were clearly on the wrong equipment so we ventured in to our onsite shop The Bodyboard-Depot and a number of the course attendees took the opportunity to use some of the swim fins that we suggested for the afternoon session. Graham Barr from London had been incorrectly sold a 45” board by another shop. We quickly got him on a 42.5” board with a single stringer that enabled him to increase his wave count, improve his duck diving and eliminate the problem that he was having with nose-diving. The swell was building so we headed to the perfect two foot waves of the semi secret spot; Great Western ‘mini wedge’ for our afternoon session. This session we introduced the Go Pro water camera as well as the land camera to get dual angles of the action and really give us something to work with back in the classroom.

A salute from Mr Barber as Cathy Kingcome catches a cracking wave which coach Joe Woodhouse captured from the water on the Go Pro.

We headed down to ‘The Breaks’ restaurant on the sand at Tolcarne beach on Saturday night for a beautiful evening meal of Fish and Chips. Big thanks to The Breaks for the bodyboarders discount that they gave to us. The food was delicious.  The crew spent the evening comparing bodyboarding tales, they discussed their local breaks and everyone was buzzing to see the waves that the next morning would bring as the forecast was looking epic.

On Sunday morning our team of instructors checked the waves at first light. Even though it is the end of October, water temperatures are still fine and many people were wearing 3/2mm suits, it was very pleasant. The waves were building fast so the decision was made to have a longer than usual session, timed to perfection for just after the high tide when the paddle out was fairly easy.  It was during this session that the crew caught some fantastic, clean, fast breaking five-foot right-handers and showed some awesome improvements. Craig Burnett from Newquay  commented “I’ve caught the best 5 waves that I have ever caught!” He continued “The first wave of the session being the biggest wave that I’ve ever ridden – STOKED!”.  Other highlights included Jane Oxley catching three left-handers, which saw her over come her hate for going in that direction. Chris Clayton-Moss from Bournemouth had a grin from ear to ear and paddled straight up to head coach Rob and high fived him after an huge epic drop and bottom turn on a right hander which wedged off the island at Towan beach.  Mark Rigby was very comfortable in the big waves and dealt with an awesome late drop really well. John Faulkner got caught inside for a long time but remembered the tuition that we had covered about timing his paddle out to avoid the set waves and increasing his paddling speed by using the correct body position. Soon enough he was outback and caught some excellent rides, making the most of the clean walls of water.

Simon Town claimed the grand prize and grabbed himself a new Found MR. This was well deserved after some vast improvements and some chunky rides!

Rob Barber also got stuck in and found some cracking lefts down at Towan during the final session!

The crew took a moment to admire Mother Nature’s spicy recipe before heading back to the Depot for the final time.

Simon Town claimed the grand prize and grabbed himself a new Found MR. This was well deserved after some vast improvements and some chunky rides!

The Armageddon Swell Hits The Cribber!

After the final video analysis session, the full force of the storm had hit so the crew took a guided walk down to Towan Headland where they checked out the huge waves breaking at The Cribber. The power was incredible and everybody was blown away by the intensity of the waves.

Another great coaching weekend came to a close and many of the course attendees have either booked up for a winter bodyboard coaching trip with us or would like to come back for more coaching in the new year.  Five of the nine attendees had received coaching with us before, proving that they have returned as they have found that not only does it work, but also it really does increase your bodyboarding enjoyment. We shared a weekend of great waves and good times, which saw improvements across the board as well as some good friendships, made for the future. They proved that their bodyboarding skills are now officially storm proofed, totally prepared for the winter swells!